The 1993 Grand National was a very controversial event that resulted in frustrated fans, confused jockeys and criticism directed at the race starter. The event was plagued by protests and false starts resulting in a race that was called ‘void’ by officials. 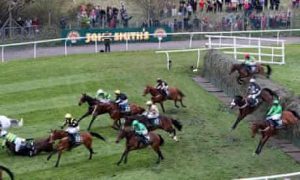 Even before the horses made it to the track, there were problems at Aintree. Animal rights activists decided to jump on to the track near fence number one, making the race delayed. Already anxious horses and jockeys were ready to go. Still, the first start was a false one because several jockeys had the tape wrapped around them and the starter waved his red flag, as well as other officials, did. After various tries at getting the horses ready, the field was off again, and this time the tape got tangled around the neck of one jockey. Another false start happened in the same fashion. The starters red flag did not unroll properly, and 30 of the 39 runners took off believing the race was still going.

Officials, trainers and the crowd attempted to stop the race or signal to the jockeys, but they kept going. At the final fence of the first lap, many riders were finally made aware of the false start. 14 horses were still racing on the second lap. Eshna Ness crossed the line first followed by Cahervillahow and The Committee Fourth.

Confusion reigned after the event, and the starter alluded to another race, but it was declared void. Bookmakers and betting agencies had to refund around £75 million in bets.

Many of the jockeys did not stop because they thought that the flags were being waved by protesters. The riders that continued thought the lack of horses was because of falls which is usual for the Grand National.

‘The race that never was’ resulted in some serious investigations and improvements to the start. It was unforgettable.